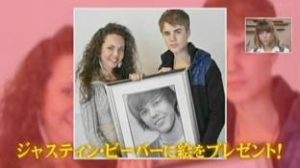 Recently Rajacenna has been broadcasted on Japanese television in the daily TV program called “the Prime Show”.

The ‘Prime Show’ highlighted Rajacenna’s drawing and video of Justin Bieber which she made in 2009. For the last three years this video has been popular and frequently viewed daily worldwide. The popular Japanese TV show, with daily entertainment news from around the world, was very enthusiastic about the work of the now nineteen years old artist. Under the name “Prime Star Project” the Japanese were treated with the realistic drawing skills of the young Dutch talent. This television coverage is ideal for Rajacenna to promote her art work for the Japanese people.